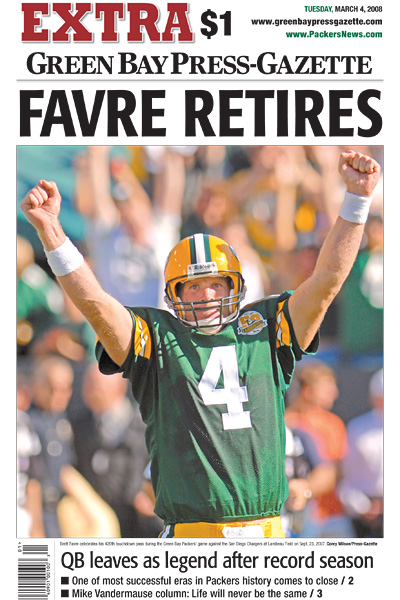 It would have been nice if the final pass of his 17-season career hadn't been intercepted. Or if the final game of his football life hadn't been a loss in overtime. Or if the lingering memory of that Jan. 20 NFC Championship hadn't been of Brett Favre looking as though he'd just been removed from the frozen food section of your local grocery store.


But Favre has always defied logic. He played when his body begged him not to. He threw passes into slivers of daylight, or no light at all. And he retired when it seemed there was every reason for him to return for an 18th season.

I don't blame him. The NFL ages you like dog years. Every game extracts a price not only from your body but also from your will. Favre can still throw a football through three sheets of drywall, but there's more to it than that.

Favre has something left, but not enough. He can play, but he can't play like Favre anymore. Not every down and not every game. His heart -- and that's the body part that made Favre great -- isn't into it anymore.


Ron Wolf was the Green Bay Packers' general manager who traded for him in 1992. He heard about Favre's retirement from a neighbor.


"I was really surprised about that," Wolf said Tuesday evening. "Everything he did was with such great passion. But the more I thought about it, if he decided he didn't have that passion anymore, it was probably the best thing that he retired."

Favre could have quit a year ago and everyone would have understood. Instead, Favre returned to Green Bay and became 23 again. Otherwise, what was the point?


Half the fun of watching the Packers work their way to the conference championship game last season was watching Favre. That's what I'll miss. He played like he was still drawing plays in the dirt. He played like his hair wasn't gray and his bones didn't ache.

Favre made his Packers debut in Game 3 of the 1992 season. He replaced an injured Don Majkowski, and on his first play called an audible that didn't exist. Then he was sacked and fumbled away the ball. He was a green and gold train wreck.

Then Favre put together a last-minute, game-winning drive that day against the Cincinnati Bengals. He even was the holder on the extra point, though go watch the video of it. So scared was Favre of getting his hand kicked that he did a Lucy, of Peanuts fame, and actually let go of the ball moments before the PAT attempt.

Wolf thought Favre was the best player in the 1991 NFL draft, but Atlanta got to him first. Falcons coach Jerry Glanville couldn't see past Favre's immaturity, so he sent him to the Packers the next year.

Turns out he was one of the best players in any draft. Turns out he'll be a first-ballot Hall of Famer and -- sorry, Don Hutson -- go down as the greatest player in what Wolf calls "the citadel of pro football" -- Green Bay.

ESPN did one of those sound track highlight reels with Favre one time. There he is telling a ref, "Take two weeks off and then quit." There he is unleashing a belch that lasts longer than the national anthem. There he is saying that just once he'd like to throw a ball left-handed.

He wasn't the greatest quarterback ever to play the game. But I'd pay to see him. In fact, I did exactly that earlier this season. Took one of my daughters to Lambeau Field and sat in front of two drunks in orange deer-hunting gear who, to their credit, said before kickoff: "You know how there's always a couple of guys who are really obnoxious during a game, eh? That's us."

Didn't matter. The Packers beat the Carolina Panthers. Favre threw three touchdowns. And one of the drunks spilled his freshly purchased beer on my shoes.

His passing records matter, but they don't define him. Favre wasn't about numbers, he was about letters: W or L. He played hurt. He played hard. He played in more snow than Iditarod dogs. By the time he was done, he had played in 253 consecutive regular-season games, 275 if you include the playoffs.

I'll remember some of those victories, but mostly I'll remember his Lambeau Leaps, or how he slung wide receiver Greg Jennings across his shoulder pads after throwing his record-breaking 421st career touchdown pass. I'll remember his old-school sideline handshakes with teammates, when he'd tell them, "Put 'er in the ol' vise." Or how he'd fake a throw after a handoff.

The NFL got a little less interesting Tuesday. You watched Favre for what he did and what he tried to do. You marveled at his complete and utter fearlessness. You shook your head in amazement when he made great plays and when he made bonehead plays.

I wished he would have stayed one more year. But that's the selfishness talking. At some point, he had to leave. It was inevitable.

There will be withdrawal pains -- for him, and for us. Favre played the game like he loved it. Maybe that's why he's leaving.

He wanted to keep it that way.

Gene Wojciechowski is the senior national columnist for ESPN.com. You can contact him at gene.wojciechowski@espn3.com. 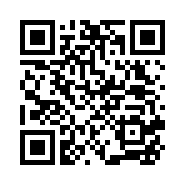